Destroying Islam & Rebuilding It in the Image of the West

As we have previously mentioned in our write-up here and here, rockstar Muslim "celebrity sheikhs" and their groupies are not a pathway towards political and intellectual revival.  In order for Muslims and the general public to understand why this is the case, it is necessary to look back in time and see historically just how Muslim intellectual life was politically subverted via colonial  interference and foreign control.  This short write-up from over a decade ago, accurately and succinctly describes the colonial process necessary for controlling the minds and intellectual life of people residing in the Muslim World.  This form of colonialism was more insidious and long lasting - the shackles were mental and invisible -- but much much stronger.  The names/faces and hyped up personalities may change but the process remains essentially the same.
It is our view here at iSiyasah that any form of revival -- if it is to be genuine-- must actively work to undo these mental shackles and intellectual barriers to build an alternative and independent political and ideological order.

Destroying and Rebuilding Islam in the image of the west


As the Christian millennium looms, Muslims - rather than joining the celebrations - might fruitfully use the occasion to consider the Christian and western influence and impact on Islamic civilization. Beginning with the Crusades, and for nearly a millennium since, western Christian colonial and cultural incursions into the Muslim world are characterized by dastardly acts and destruction. Consider, for example, this case:

"They opened fire with cannons and bombs on the houses and quarters, aiming specially at the mosque, firing at it with those bombs. They also fired at suspected places bordering the mosque, such as the market. And they trod in the mosque with their shoes, carrying swords and rifles. Then they scattered in its courtyard and its main praying area and tied their horses to the qibla. They ravaged the students' quarters and ponds, smashing the lamps and chandeliers and breaking up the bookcases of the students and the scribes. They plundered whatever they found in the mosque, such as furnishings, vessels, bowls, deposits, and hidden things from closets and cupboards. They treated the books and Qur'anic volumes as trash, throwing them on the ground, stamping on them with their feet and shoes. Furthermore they soiled the mosque, blowing their spit in it, and urinating and defecating in it. They guzzled wine and smashed the bottles in the central court and other parts. And whoever they happened to meet in the mosque they stripped. They chanced upon someone in one of the student residences and slaughtered him."

When people first read this quote, some think it depicts the Christian expulsion of Muslims from Spain, while others see in it more contemporary events, such as the Christian genocide of Muslims in Bosnia. Certainly the deeds and barbarities described are consistent with many instances of western atrocities against Muslims. Murder, plunder, destruction, humiliation - Muslims have suffered all of these at the hands of western invaders.

11.   Like Boy bands and Britney Spears we are aware that you, "Sheikh" Hamza Hanson have your share of Groupies, lackeys, and even stalkers.  Given the sorry state of Islamic identity among Muslims in the West, most especially among the 2nd generation native born South Asian Muslims in North America (i.e. your core groupies) this problem is probably much more pronounced.  You see 2nd generation Muslims of a certain socio-economic status have a deep seated inferiority complex to American society, its why they have to go to Non-Muslim academic institutions in the West to learn Islam from Non-Muslim professors and teaching assistants in "Islamic" studies departments.  Never mind that many of these same institutions could care less about this subject or have historically been engaged in far more research and projects funded by the armed forces to grow/maintain the American empire overseas or are at war with Islam itself.

Your conversion to Sufi Islam as a Caucasian male is all the reassurance someone suffering from a deep seated inferiority complex or identity crisis and who lacks any type of backbone, spine, or thought process to assert an independent identity of their own needs to have to practice their own faith.  So bravo on that!

Note: In light of the ongoing NSA spying revelations by Edward Snowden, the Guardian, and journalist Glen Greenwald, we present an online reprint of an amazing article (first published in Crescent International in 1997) which details the foundations of the western and secular ideological obsession with spying on citizens to maintain "control", "order", and "security" as well as briefly, an alternative ideological Islamic viewpoint related to this matter. It is our belief at iSiyasah that the surveillance state is part and parcel of the secular liberal ideological construct that denies existence of a creator in order to allow other select elites to exploit and control the masses; therefore, not looking at other ideological constructs is an issue that is neglected in the ongoing discussions about NSA surveillance, security, and civil liberties for citizens.


Declassified documents, leaked information, insider sources, and public confession by former intelligence operatives have recently revealed that in the late 1980s New Zealand joined the United States and other western governments in a super-secret global intelligence system to monitor most of the world's phone, fax, telex, and electronic mail communications.

Why Iran is NOT an Islamic State

The purpose of this article is to lay out concrete evidence to dispel the myth that Iran (as they claim) is an Islamic State.  Before we address this myth, we at iSiyasah.com would like to point out that all those claimants of "Islamic governments" of today are myths too.  There is not one state today that adheres to the principles, rules, and laws that our beloved prophet (SaW) laid down with regards to statecraft and political practice.  This blog post is an attempt at demystifying and deconstructing one such attempt via the "Islamic" Republic of Iran to pass itself off as the Islamic state or model for all other Muslims to emulate.

That being said, Iran is NOT an Islamic state. 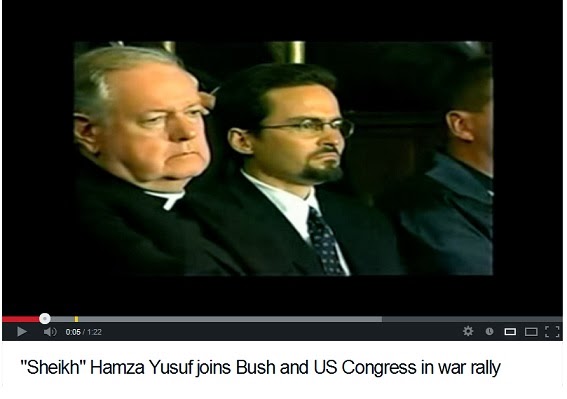 America Exports a lot of cultural garbage in the name of globalization/capitalism to the rest of the world.  Everything from cheaply manufactured pop 'music' acts (boy/girl bands, Britney Spears, etc), to McDonalds/fast food, to trashy 'reality' TV shows, to cheaply made plastic toys, to pornography -- if there is a way to monetize behavior in the name of profits and new markets, the tools and levers of capitalism are there to help commoditize human experience.

To this disposable scrap heap, should be added the new US Government made version of "American" Islam.  It's chief principal spokesperson or BritneySpears-like pinup namely being (self-styled) "Sheikh" Hamza Yusuf [Mark Hanson], pictured at Bush's post 9/11 speech above)

This un-elected, media anointed "spokesperson"for Muslims, like any media celebrity, comes with his own fawning entourage, many of whom would sell their souls just to bask in his presence.   In an attempt to help clarify where reality/truth begin and where the celebrity/fantasy world ends, consider this blog post a very humble request for "Sheikh" Hamza Hanson & his followers to get a reality check.  To that end, here are 20 questions (which can be answered in any order) that we have helped compile over the years at iSiyasah that can help expedite the process:

The Return of Mubarek's Children

The children of Mubarak have returned.
It would be foolish to believe that Mubarak spent 30 years of ruling without permeating every facet of Egyptian bureaucracy, media and economy with like minded people. Of course, the people are not devotees to the cult of Mubarak, but they are old guard Secular Nationalists from the post-colonial era of the 1950s in the Muslim world. These are known in Egypt as the ‘felool’.
They have made their nation their idol, and view religion and politics to be separate things, albeit with a few cultural values left to placate the Muslim masses. Mubarak was from that era, and was a product of it.
But after being forced to retire their former frontman Mubarak, due to popular protests, and grudgingly accepting elections that, despite their best efforts, saw the victory of Mohammed al Morsi and the Muslim Brotherhood (MB), the Secular Nationalists have risen again.
But how did they return? Simple, they never left.

Just when your imaginations think the client regimes in the Middle East cannot get any lower, one of them pull through and demonstrate that they can.

Posted by Sleeping Giant at 2:35 PM No comments:

Email ThisBlogThis!Share to TwitterShare to FacebookShare to Pinterest
Labels: Morocco

Please comment and let us know what you thought about it.

At least 120 supporters of Egypt's ousted president, Mohamed Morsi, have been shot dead by security officials in what is the worst state-led massacre in the country since the fall of Hosni Mubarak, according to figures released by Morsi's Muslim Brotherhood. Earlier reports on Saturday said the death toll had exceeded 136.
Posted by Danimal at 12:39 PM No comments: